Confession of Sins and Eternal Security

Many Christians read the above passage and again they add in their mind, without even realizing, the following: “Yes, there is therefore now no condemnation to those who are in Christ Jesus [as long as they don’t have any unconfessed sins in their lives].” However, that is not true. As we will see from the Bible, confession of sins doesn’t constitute the basis, or the condition of MAINTAINING salvation. Once believers are justified by faith, they have peace with God forever:

1 Therefore, having been justified by faith, we have peace with God through our Lord Jesus Christ.

If maintaining justification or salvation depends on believers’ confession of sins (either of all sins or even only the known sins), then the most loving thing that God, the Father, can do for believers is to take them to heaven immediately after they are saved. This way believers are not in danger of ever losing their salvation by missing even one unconfessed sin. When believers confess their sins, can they be sure they confessed everything? Do they have enough time to confess everything?

For Martin Luther, confession of sins was a daily discipline. Sometimes, he confessed for as long as six hours at a time! He took it to the highest extreme. Luther was asked on one occasion, “Do you love God?” to which he answered, “Do I love God? Sometimes I hate Him.” How could someone say such a thing? Only  someone tormented by his sin could come to such a conclusion. Luther confessed for hours. He would review regularly the Ten Commandments and the seven deadly sins and the greatest Scriptural fear he had was breaking the First Commandment, “You shall have no other gods before Me” (Exodus 20:3). He would also review often the Sermon on the Mount and question whether he could faithfully live according to its principles. The scenes of judgment in the Book of Revelation haunted him as well. R.C. Sproul explains with more details what used to happen in those times in this way, “Confession was a regular part of the monastic life. The other brothers came regularly to their confessors and said, ‘Father, I have sinned. Last night I stayed up after ‘lights out’ and read my Bible with a candle’ or, ‘Yesterday at lunchtime I coveted Brother Philip’s potato salad.’ (How much trouble can a monk get into in a monastery?) The father Confessor would hear the confession, grant priestly absolution, and then assign a small penance to be performed. That was it! The whole process took only a few minutes. Not so with Brother Luther. He was not satisfied with a brief recitation of his sins. He wanted to make sure that no sin in his life was left unconfessed. He entered the confessional and stayed up for hours every day.” Luther’s reason for confession was his fright about God’s judgment. He thought God was offended by his sins, but God was not offended because of Christ’s sacrifice. Luther lived in daily fear of the immediate judgment of God on his life. He said on one occasion, “If I could believe that God was not angry with me, I would stand on my head for joy.” That’s how much he became distressed with the enormity of his own sins and his inability to satisfy a righteous God.

Luther confessed every sin. He hated his sin. In fact, because of his obsession with confession, Luther was even deemed crazy. Some monks believed he had deep sexual struggles, because only that kind of sins would bother a monk so much that he would confess as much as he did. The monks thought Luther was on the verge of a psychotic episode or breakdown. His heavy doses of confession caused even physical pain and suffering to him. He developed digestive difficulties (e.g., kidney stones and gallstones) due to the anxiety caused by his battle with sin. No particular sins distressed him. It was his overall corrupt nature –“What can I do to win a gracious God? Oh my sin, my sin, what shall I do with my sin?”

Today, maybe Christians don’t take confession of sins to such extremes like Luther, although they should, if they were really serious about it. However, they still go through a similar relative torment like Luther and always feel unworthy before God. The Israelites in the Old Testament had a Day of Atonement once a year when they would confess their sins and put them all on a goat – a scapegoat called Azazel – and then they would send that goat in the wilderness. Can anyone imagine a few million Jews taking the time to confess all their sins from that past year to the priests? The whole process would have taken a few years to end and the priests would be exhausted or die of exhaustion. Did the people confess their sins like believers do today? Of course not. Whenever people brought animals for sin offerings, would the priests examine the people of their sins, or the animal for sacrifice, which had to be spotless and without any defect? The animal, of course. The priest would examine the sacrifice and not the person bringing it, because the whole reason for why anyone would bring a sin offering was that they sinned. No need for further examination.

Similarly, when John the Baptist baptized people in water at the river Jordan, the Bible says that people would come to him and confess their sins. They would not start confessing every little sin to John in the water. In both of these two described cases, confession of sins meant acknowledging that they had sinned before God, and believing that He forgave or covered all their sins. This is what born-again believers do, once and for all, at the moment of their salvation. Think about the criminal on the cross, who had a multitude of sins, which he didn’t confess. He just asked Jesus to remember him when He would go into His kingdom and Jesus promised him that He would take him to heaven. Why would God be interested in hearing about every dirty and filthy sin of ours? He knows and sees plenty of it, everything is open in His sight, He already knows everything, and He already paid for all sins through Jesus’ sacrifice.

The truth is that, even if we think that we have a sincere and pertinent reason for confessing our sins, we actually do it because we cannot forgive ourselves and because of our self-righteousness. We are trying to show God that we are not that bad, that we can do something to fix the wrong and become again worthy before Him to receive His blessings, and to have Him move with power in our lives. Does confession of sins really help us in not sinning anymore? As you probably noticed in your own practice, most of the times, it doesn’t. You confess the sin and then you do it again most of the times, because that confession in itself keeps you in the cycle of sinning, by making you focus on the sin and on your inability to overcome it, and not on Jesus.

Now, let’s look at confession of sins from a different angle. When people do something wrong to us, should we expect them to ask for forgiveness first in order to forgive them? According to the Bible, no, not at all. We should forgive people no matter what they do, and even about 490 times a day. If God requires that of us, wouldn’t He much more treat us the same way? Yes, He would. He has already removed all our sins, without waiting for our detailed confession of every sin. We confessed once that we were sinners and that we needed Jesus’ sacrifice to cleanse us, and this was enough for Him. Apparently, the sacrifice of Jesus is not enough for us. We feel the need of crying and making penance for every sin repeatedly. An even more concerning question is this: What happens if a believer suddenly dies with unconfessed sins? Is he not saved anymore? Does he go to hell after living a lifetime with God? Sadly, many Christians and even leaders think that these believers would go to hell. In order to alleviate such a terrifying conclusion, they say that, in reality, not many believers will be in that situation, because God will ”orchestrate” their death in such a way that most Christians would die with all their sins confessed. Are you ready to believe something that doesn’t even have a biblical support, rather than believing that all your sins have been removed and that, no matter when and how you die, you go to heaven? Such an assumption would mean that believers are saved completely and permanently only at the end of their lives, and even then, only if they confessed all sins. This conclusion is not biblical.

Now, if we look carefully in the New Testament, we can easily notice that Jesus, in all His life on earth, never mentioned confession of sins, not even when He initiated the Communion (or the Lord’s Supper) in the upper room with His disciples. He didn’t tell them to take a few minutes to examine themselves of their sins, make sure they confessed everything, and then partake of the bread and the wine, or not partake at all, if their sin is too heavy. Furthermore, we can see apostle Paul speaking in so much detail about salvation, justification, and sanctification in all of his doctrinal epistles (Romans, Galatians, Ephesians, Colossians, Philippians, 1 and 2 Timothy, etc.), but never mentioning anything about confessing sins. How could Paul forget altogether to mention such an “important” aspect of confession of sins as a condition to maintain salvation? Of course, he didn’t forget. In fact, he didn’t write anything about it intentionally. In his letter to the Corinthian Christians, many of whom were committing sins like visiting the prostitutes from idols’ temples, he didn’t tell them to confess their sins to get right with God, but rather he reminded them of who they were in Christ:

16 Do you not know that you are the temple of God and that the Spirit of God dwells in you? 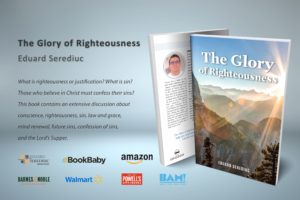